I'll confess right off the bat that this is nothing more than one of those, "Hey! Look what I did!" posts that everyone (including myself) skims through, but this one is important to this blog-owner, so there.

I have wanted to paint a good Boba Fett miniature for pretty much my entire time in this hobby. A few years ago, a small company called Knight Models released this version, which was great. . . but it was so limited in its release that it is still to this day way out of my comfort zone for single-miniature prices. So I've waited patiently.

I was very excited to see that Fantasy Flight was releasing a model of the bounty hunter later this month, and I was extra excited when they sold them a few weeks early at GenCon, enabling me to get my hands on one this week. A few fevered hours of painting later, and the armored villain takes his rightful place amid my other minis. Hooray!

Thanks to all of you who have dutifully blogged on all of the various recent summer mini conventions. It all sounds great. One day. . .

And Now For Something Completely STAR WARS

So, Fantasy Flight Games' Imperial Assault is all of the following:
1. Super fun to play with my entire family, including the six-year-old
2. Actually two games in one, since there are separate rulesets to play either the story-driven campaign missions, or the throw-down-and-slug-it-out "Skirmish Mode"
3. Totally worth it for the miniatures alone. . . IG-88!!!

My painting mojo is in overdrive right now. I have always wanted to paint up SW minis, but with only the old Grenadier models from the West End Games version to work with (not what I would exactly deem "crisp, detailed sculpts"), I never got the chance to do anything really exciting. And now, I have Boba Fett on the way in the post now. Pretty stoked on that.

The game really is great. I don't want to gush too much, but I give it my most enthusiastic approval.

I will continue to live vicariously through all you blessed bloggers. Thanks for what you do, lead brethren. Take care.
Posted by VeronaKid at 2:22 PM 2 comments:

Six months is enough of a break, Get back to work, slacker.

First off, thanks very much to those of you who have emailed and made sure that I am still of-this-earth. It is nice to feel a part of a global community of like-minded individuals.

I am, in fact, still hard at work painting- it's just that much of the work I have been getting done minis-wise of late has seemed less-than-sharable via this blog. I've been exclusively performing all those mundane tasks that I know all serious hobbyists will nod their heads knowingly about: re-basing warbands (no, NOT for that!), prepping Kickstarter reward packages, and painting minis for other people. These things take time, and they are not the most exciting of topics . . .

I have managed to get through two batches of commission work since the last time I wrote. Avid readers of this blog (hah!) will remember that I had given this up earlier in the year to focus more on my own collection. Well, the money is too good and I need too much of it, so it's back on that wagon for ol' VeronaKid.

The first group was this set of beholders. I can't imagine why my client would possibly need so many considering the monster represented is usually a unique addition to a D&D campaign, but hey- these were fun as hell to paint up. My favorite of the batch was certainly the Julie Guthrie-sculpted Reaper version in purple here in the back-left:

The three goofy looking guys that are painted in aqua were also great sculpts, although I have no idea what company or sculptor they come from.

After polishing them off, my client sent me this sweet batch of elementals and constructs, which I just finished off last weekend:

I know the picture here is dark, but I never managed to shoot a decent one of this batch before I sent it back. The huge rock guy in the top right is a killer sculpt from Reaper, and this one in particular was the Bones plastic version, so I assume it is very inexpensive to pick up. My favorite from this batch though is definitely the Albion Fenbeast who is right in front of the rock-hulk. The summer GW campaign that he came from was one of the highpoints of my own personal gaming career. That summer, I must have played WHFB at least three times a week with a really great group of guys. Good memories, and a great sculpt.

Other than that, as I mentioned I have been re-prepping older minis of mine for use as various Skulldred warbands. These were originally all based in very hap-hazard, non-matching manners (different basing materials; some round, some square, some hex-based; etc), so I am trying to "tidy up" the collection, so to speak. Plus, it's cheaper than buying new minis!

Here's shots of a few representative minis from each of the war bands my various family members play in our weekend games:


That's really about it. Life has been far too crazy to do anything like actually play games with any of these figures, but I hope to remedy that soon.

I have to say, I am very amazed at the thunderous silence in this community (and it's associated blog-o-sphere) over the new Warhammer "Age of Sigmar" stuff. I would have expected a much louder outcry along the lines of "See??!!! We knew they would ruin it!!!" I would think that the quiet murmurings simply indicate that old-timers have long since given up altogether. I, for one, still check the GW site frequently. I wouldn't dream of purchasing a plastic figure at their prices, so I haven't ordered anything from them in probably five years now, but I do think, actually, that the new game indicates a step or three in the right direction. Smaller forces encouraged and therefore a smaller initial investment required to participate? Check. Easier-to-digest rules (a la Skulldred, or SOBH) which in turn encourages a younger audience? Check. Elimination of ranked models which in turn eliminates fiddly maneuvers and the subsequent "wait an hour while your opponent moves his entire army" syndrome? Check. It really does feel that the new game is headed back towards its more narrative-driven roots and away from things like Death Star units, killer combos, and out-of-control magic phases.

I do applaud GW for once for not just making the game more bloated and (worse) more exclusive. Blow it up and start anew. Good job.

Hope you are well, wherever you might be. Take care, leadheads. Hopefully the next post here will be before the winter holidays roll around again. :)
Posted by VeronaKid at 5:04 PM 4 comments:

Just a quick mid-week update to celebrate the completion of my dwarven infantry. The last three foot soldier models join the fray, this time thanks to a couple of Perry Twin sculpts and a random Ral Partha stunty:
Here's a couple of group shots of the whole 25-strong unit. Lots of various manufacturers from lots of wargaming eras represented here. Plenty of green to go around on this 17th of March, huh? Spot anything interesting? 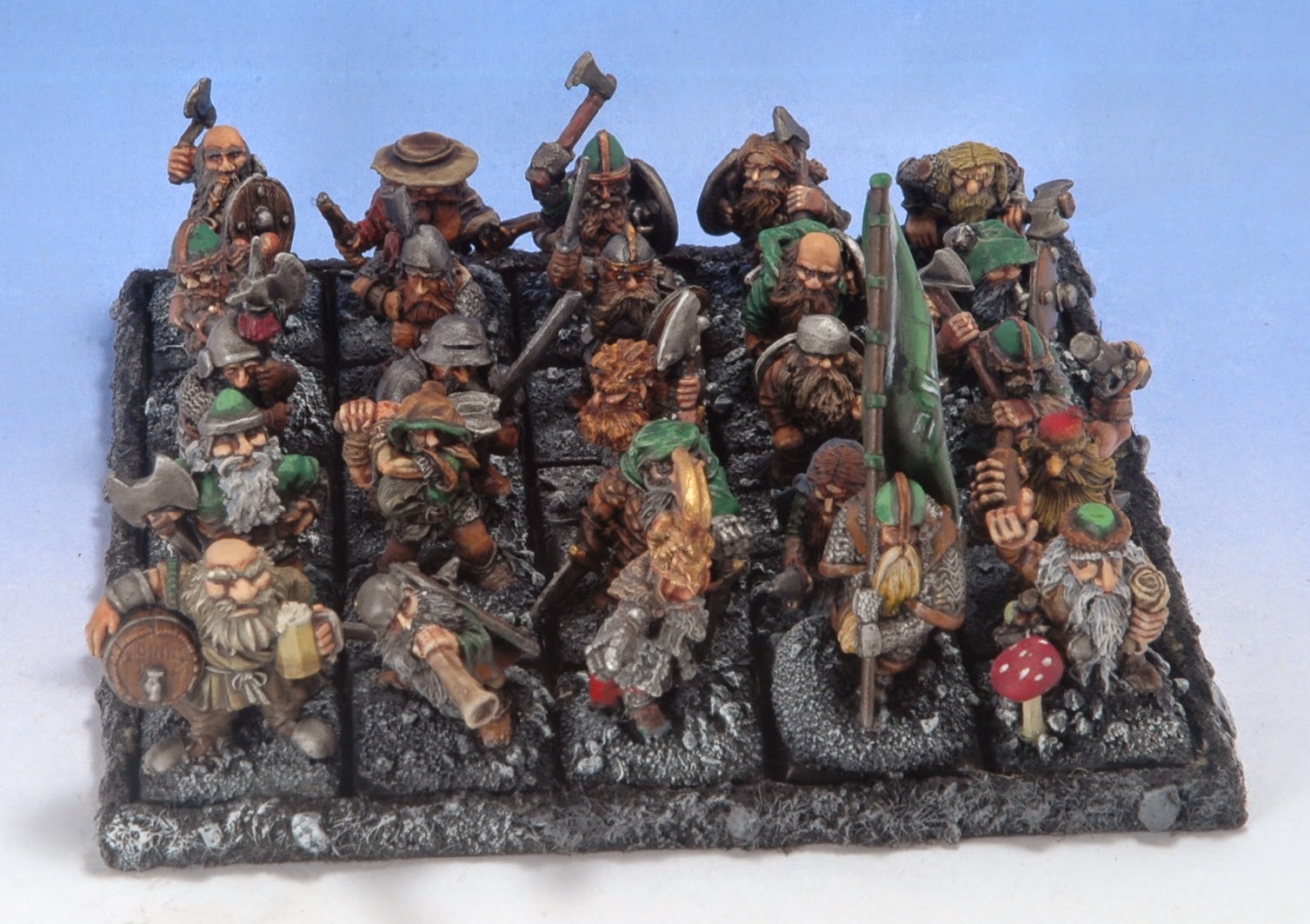 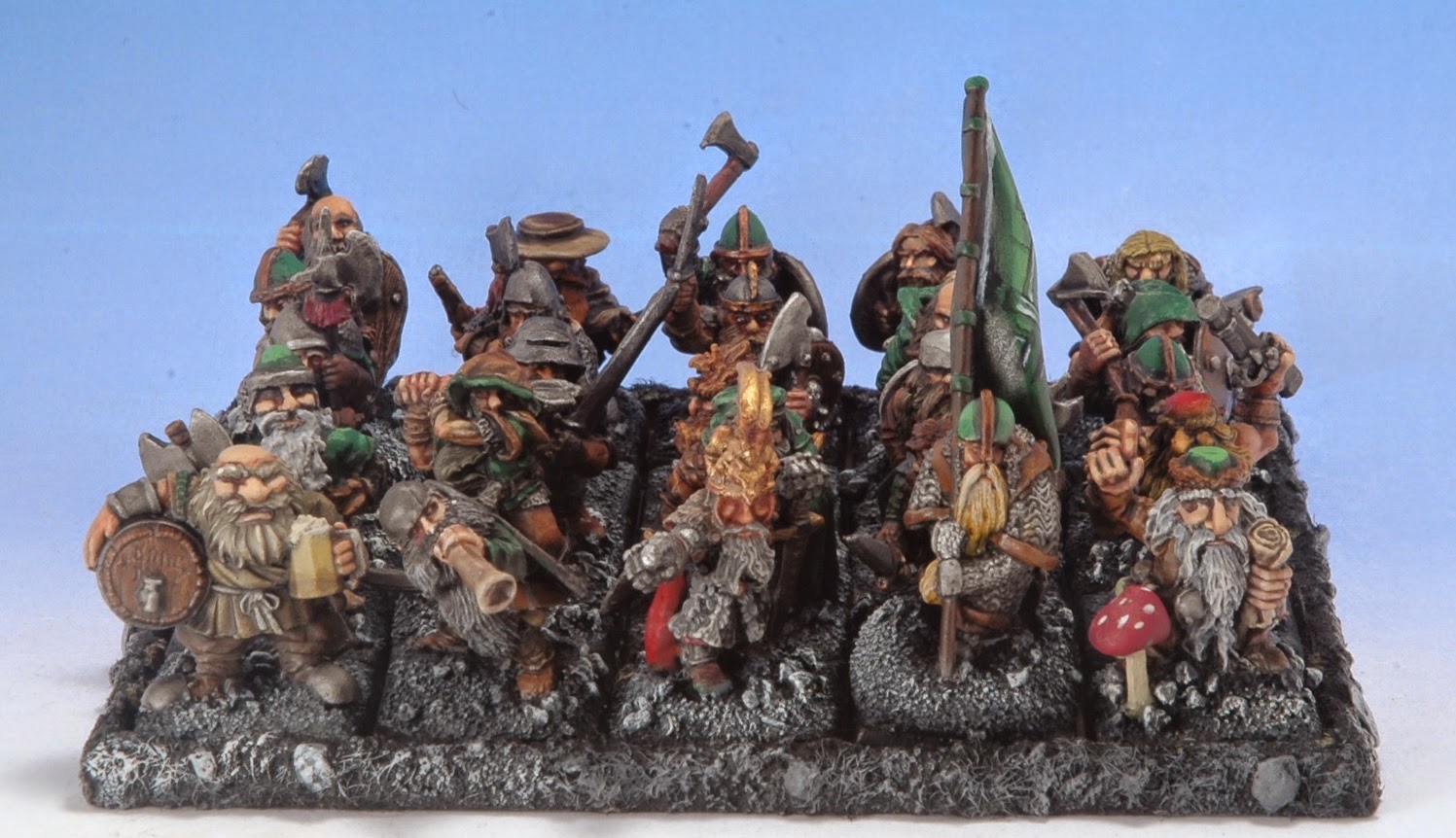 Happy St. Patrick's Day, lead peeps. Go have a pint of the black stuff on VeronaKid.

Nick Bibby continues to astound me. He shouldn't- the dude has a full time gig as a not-miniature-but-like-museum-kind-art sculptor. But those brief years he spent at the Citadel design studio needs to be celebrated. He is, in every way, a master of the craft.

I recently picked up the AD&D Minotaur he did back around 1987. It may not knock the Spined Dragon off its post as the greatest mini of all time, but it's not far behind.


This model had two other variants that I am not such a huge fan of, but this one in particular is, to my eye, just about perfect. The thing that really sets it apart for me is Bibby's attention to "realistic" anatomy. The musculature is spot-on, and the pose has a sense of heft that, I believe, must be very hard to achieve.
There are veins in the arm muscles that my camera (and my inadequate paintbrush skills) don't entirely pick up. There are several pimples, great fur texture, realistic growth scars on the horns. . . it's just a really, really great sculpt that I can't recommend enough.

Early on in my painting of this fella, I had dreams of an homage to the classic version that Colin Dixon painted that is featured in Heroes for Wargames. I found out, however, two important facts:

1. I am nowhere in the ballpark as good as Colin was at painting flesh (actually, I kinda knew this one already).
2. Pale flesh tones look a lot better in pictures than they do in 3D.

After getting a tone pretty close to Dixon's classic original, I decided it was not deep enough for my tastes, so I added a few dark brown and reddish glazes to make mine more tanned. Like a minotaur not unaccustomed to spending time down by the shore. I settled for adding the rock path and Mario mushroom to the base to pay my respect.

This one will feature as a mercenary hire for Skulldred games in my house. I can't wait to come up with stats for this model. :)

I hope your own leaden pursuits continue unabated, brethren (and sistren!). Take care, all.
Posted by VeronaKid at 5:01 PM 7 comments:

Wot I Likez To Read